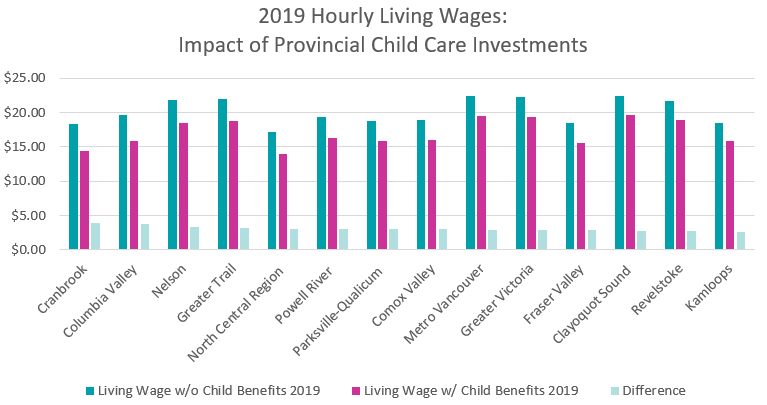 This week, November 11-17, is Living Wage Week. We're celebrating with a series of blog posts that dive deeper into our living wage calculations and what they reveal about working poverty in BC.

First up: learn how the provincial government's child care policies affected our 2019 living wages by offsetting all other increases in the cost of living.

Earlier this year, we released updated living wages for 14 communities across BC. The number one question we saw in response was why this year’s living wages went down.

The cost of good and services in our province is not decreasing – and in fact, it’s getting more expensive to live here. How, then, can the living wages be lower?

The living wage calculation takes into account more than just the costs of basic needs for an average family of four. It also includes government taxes, transfers, and subsidies that the family would be eligible for. We do this so that the living wage is reflective of the full picture of what it takes to afford to live in a particular community: what you need in order to pay for your expenses, and what you’ll receive back from your government’s public investments.

The reason that this year’s living wages decreased is because the provincial government recently implemented two child care policies that offset all other cost of living increases for families with children. These are the Affordable Child Care Benefit, a variable amount paid to parents based on their income, and the Child Care Fee Reduction Initiative, a universal amount paid to licensed child care providers to lower their fees. The living wage methodology calculates for a family with two children, one aged 4 and one aged 7.

Between these two programs, families in our calculations save at least 45%, and in some cases upwards of 70%, on their child care bills this year when compared to 2018 (depending on their community). This has made a significant impact on the living wages for 2019, as these savings mean that increased costs in other areas get cancelled out for families with children who are eligible for these programs.

These numbers reveal a few things.

First, they tell us that costs are still rapidly increasing for families in many communities, especially when it comes to housing. (Stay tuned for a blog post diving further into housing affordability later this week.) If not for the provincial government’s child care investments, this year’s living wages would have been between 4.8% and 7.5% higher than their 2018 counterparts – and general inflation in our province only increased by 3% last year! It’s clearly getting harder for families to make ends meet, particularly in communities where growth in costs is quickly outpacing growth in wages.

Second, these numbers hammer home that our living wage calculation captures only one family type. While we calculate based on a two-parent and two-child family because it’s the most common family type in BC, we know that other families are facing different costs than we note. Parents who pay higher child care fees for infants or toddlers, those with teenagers who may have higher food bills, or those with more than two children will still struggle if they are earning only a living wage. Moreover, we know that costs continue to be higher for other family types including those without children, single people, and seniors, particularly because the provincial government’s recent major investments have only benefited those with children.

For these reasons, we don’t just calculate living wage rates for BC. We also advocate to the provincial government to implement complementary policies that would help families make ends meet, like bold investments into housing and public transportation, as well as improved access to affordable child care for all families. The effect of the provincial child care programs on this year’s living wages show that government policy can make a significant difference in people’s day-to-day lives. What would our province look like if all major expenses, like housing, child care, and transportation, were reasonable and affordable for all of us to access? Let’s find out.

Check back on our blog all week for more posts exploring housing affordability, child care accessibility, and working poverty in BC.

*Note that living wages are not yet available for all communities across BC. If your living wage is not captured here and you’d like to help us calculate it, contact us.