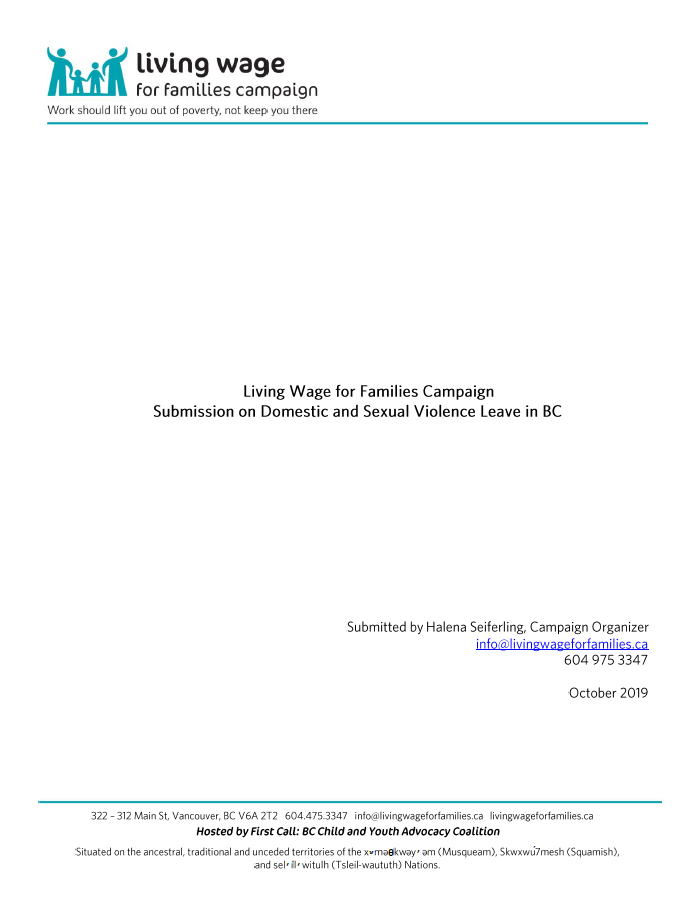 The BC government recently consulted the public about implementing paid leave for those experiencing domestic or sexual violence. The Living Wage for Families Campaign submitted four recommendations advocating for paid leave that is protected and accessible.

Domestic and sexual violence is not an individual problem – it is a societal issue that affects us all. According to recent data from Statistics Canada, Intimate Partner Violence (IPV) represented 30% of violent crimes reported to police across the country in 2017. This is also a gendered and racialized issue, as women, particularly Indigenous women and rural women, face higher rates of Intimate Partner Violence.

Having paid leave is about more than taking time off in a difficult period. As noted by the Canadian Labour Congress, “[w]hen victims of violence know their job and income are secure, they may feel more confident about seeking help. Paid leave means that people have access to time off to do things like go to court, talk with legal advisors, meet with domestic violence counsellors, find childcare or do other tasks that may need to take place during working hours.” These issues are likely exacerbated for those in low-wage jobs who may struggle to find services that suit their works schedules, to have discretionary income available for emergencies, or to be able to take unpaid time away from a job.

In this consultation, the Living Wage for Families Campaign gave four recommendations: