What Is a Living Wage Employer?

The living wage is a bare-bones calculation that looks at the amount that a family of four needs to earn to meet their expenses. The living wage includes costs like rent and groceries as well as items like extended health care and two weeks savings for each adult. It does not include debt repayment or savings for future plans.

What are the benefits of a living wage?

Good for our community

Good for the economy

When low-wage workers see an increase in their wages they spend their money locally. A living wage allows families to participate in the social, civic and cultural lives of their communities. They support local business and participate in community events. We all benefit when we reduce poverty in our communities.

Find out how to become a Living Wage Employer

Find out who is a Living Wage Employer in BC

The minimum wage is the same as the living wage

The minimum wage is different than the living wage. The minimum wage is the legislated minimum set by the provincial government. Thousands of families making the current minimum wage in BC are still living below the poverty line. A living wage calls on employers to meet a higher standard, to ensure that wages for their staff and major contractors reflect the true costs of living in a community and that parents can earn what they need to support their families.

Studies show that businesses usually absorb cost increases related to living wage policies through a combination of price and productivity increases, reduced turnover and redistribution of staff. Most workplaces don't have staff that they can do without. When BC raised its minimum wage from $8/hour to $10.25/hour in a relatively short amount of time there was a very small (1.6%) reduction in the employment rate for youth between the ages of 15 and 24 in BC (The Case for Increasing the Minimum Wage, 2015). This is a very small number and we can't be sure that the 1.6% reduction in the employment rate for youth was entirely due to the change in minimum wage or if there were other factors that changed how many youth were working.

A significant number of low-wage workers have families. Paying the living wage will lift these families out of poverty. In BC, one out every three poor children live in families with at least one adult working full-time, year-round (BC Child Poverty Report Card). For example, if we look at workers earning $12-$15/hour only 5% are teenagers and 21% were young adults (The Case for Increasing the Minimum Wage, 2015). Many families across BC are struggling to make ends meet on low wages.

A living wage policy is good for the local economy. Small businesses draw their customers from the local community, and higher incomes allow families to purchase more goods and services in their own neighbourhoods.

If wages increase, prices in stores will go up

Costs rise all the time without workers receiving a pay increase; wages are just one of many factors contributing to the cost of an item. In addition, living wage policies cover only a small percentage of the labour force. When Seattle committed to raise their minimum wage to $15/hour researchers started studying consumer prices for goods. They found that the increase in minimum wage had no impact on the prices of goods, that costs went up by the same amount in Seattle as they did in surrounding communities that didn't see a raise to their minimum wage (University of Washington Minimum Wage Study, 2016).

Workers need to educate their way out of poverty

Under current government policies it is nearly impossible for low-wage workers to afford education or training so they can qualify for higher-paying positions and still have the time and money needed to care for their children effectively. In addition, the business sector will always need low-skilled service workers, such as janitors, cleaners and other support staff, in order to run smoothly and maintain service standards. Listen to Mary Lyn Diana from the Hospital Employees' Union talk about her attempts to educate herself out of poverty. 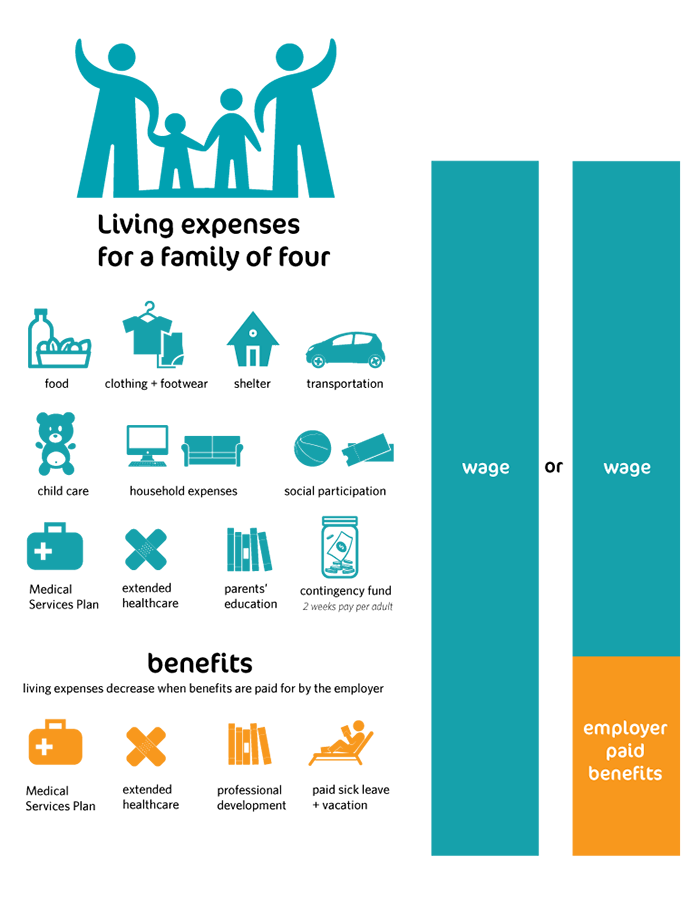 The Living Wage for Families Campaign encourages employers to pay a living wage as well as advocates for government policies that would help families make ends meet.

Join the call for an affordable and quality $10 a Day child care plan.

Many children in BC live in families with at least one adult working full-time, full-year. In other words, child poverty in BC is very much a low-wage story. For most of the past decade, BC’s child-poverty rate has remained at one in five children living in poverty. The current rate is 20.3%, as reported by First Call's  Child Poverty Report Card.

A living wage is an opportunity for employers to do better. A living wage calls on employers to meet a higher standard for their both staff and major contractors, to ensure that wages reflect the true costs of living in a community and that parents can earn what they need to support their families. More than 200 Living Wage Employers across BC agree and have certified with the Living Wage for Families Campaign.