Living Wage Week Feature #3: Is child care accessible and affordable for all BC families? 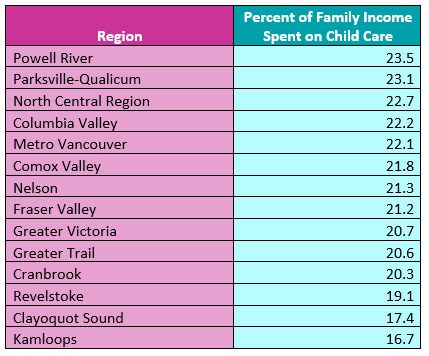 For the third post in our series for Living Wage Week, we're diving further into child care. While the living wage family is experiencing a massive reduction in their child care expenses this year, accessing quality child care is still difficult for many BC families.

The provincial government here in BC has been on a roll when it comes to child care. After implementing two new policies which drastically reduce child care costs for families – the Affordable Child Care Benefit and the Child Care Fee Reduction Initiative, which we explain more in another blog post – the government just announced they’ve funded over 10,400 new licensed child care spaces.

Even with these exciting and much-needed developments, accessing quality, affordable child care remains a struggle for many BC families. Our living wage calculations can provide insight into the child care challenges that an average working family is facing in BC today.

When measured internationally, child care in Canada is extremely expensive. According to a 2016 study from the Organization for Economic Co-operation and Development (OECD), the average two-income family in Canada spends 22.2% of their net salary on child care, compared to the world average of 15%. The BC living wage family in 2019 is unfortunately still in line with that Canadian average.

But when we look at the chart above, we can also see that high costs are not simply a case of child care being more expensive in bigger urban centres. Of the top five most expensive regions in terms of percent of income spent on child care, Metro Vancouver ranks only 5th, and Greater Victoria ranks a distant 9th of 14 communities.

This data tells us that there’s more to the child care story than cost alone. While some services may be more expensive in urban areas with higher costs of living, these services will also likely be more prevalent and easier to access. Some smaller or more rural communities may face few, if any, options for services, particularly when it comes to licensed child care, which is what we include in our living wage calculation. And if families have to travel farther distances to access services like child care, including via ferries or long highway commutes, the barriers to finding appropriate child care are even higher.

As the report notes, licensed child care deserts may exist for many reasons, including parents choosing less expensive unlicensed home care, relying on extended family to provide child care, or staying home with their children themselves. Lower child care coverage can also be due to a lack of city planning, or an over-reliance on private operators. (To learn more about the child care coverage rates of communities across BC, visit the CCPA's interactive map here.) 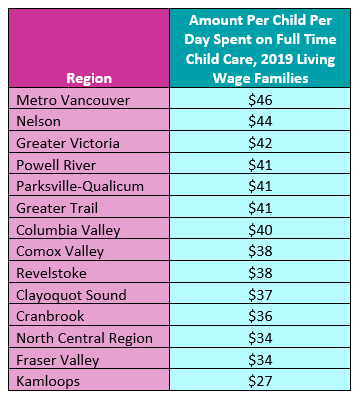 The $10aDay campaign identifies three key existing problems with child care in BC for which it makes recommendations: that parent fees are too high, that there are too few licensed spaces, and that Early Childhood Educators’ (ECEs’) wages and benefits are too low, forcing many to leave the field.

The Province is taking action on all three fronts. In addition to the investments noted at the beginning of this article, the Province has also stated that more than 10,000 ECEs have received a $1 per hour wage enhancement, with another $1 per hour lift planned for April 2020. However, a quick scan from payscale.com, a website tracking average wages in various fields, shows that the average wage for an ECE worker in Vancouver is $18.14 per hour, more than one dollar per hour below the 2019 living wage for Metro Vancouver.

Many BC families are benefiting from government actions taken so far to make child care options more accessible and affordable. But more needs to be done to ensure all parents and caregivers can access appropriate child care for their needs.

To wrap up Living Wage Week, we're publishing one more post tomorrow that will investigate the reality of working poverty in BC. See the full series here.