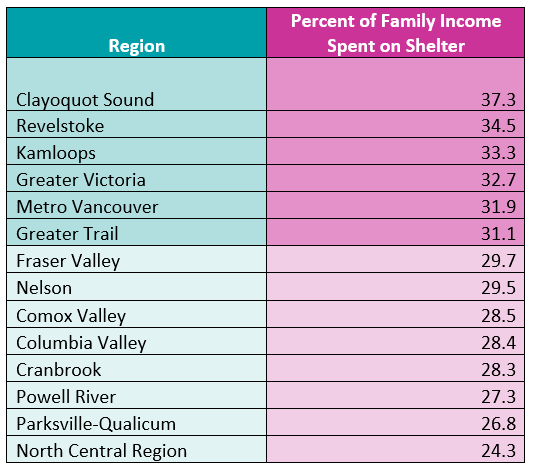 Second in our series for Living Wage Week, we're exploring whether the living wage family in our calculations spends an affordable amount of their income on housing. It’s no secret that housing affordability is an issue in BC, and getting a safe and stable place to live remains a critical issue for many working families.

Moreover, an Ipsos survey from earlier this year reported that 71% of British Columbians did not see an increase in affordable housing choices, for rental or purchase, in the past two years.

The living wage calculations can further help us understand the troubling trends of housing unaffordability in BC. Since we update our living wages annually, we can plot changes year over year in each of our calculation regions.

The living wage methodology captures the cost of shelter in each calculation community. First, we use the median cost of renting a 3-bedroom apartment in each region. We do this to capture what a working family’s reality would be, as they would more likely rent than be able to own a home. We calculate for a family of two parents and two children, which is the most common type of family in BC, and believe each child should have their own bedroom. We also include costs for household utilities, renter’s insurance, home internet, and the cost of two cell phones, recognizing that modern households need to stay connected to society. The data in our shelter category comes from the Canada Mortgage and Housing Corporation (CMHC), the Consumer Price Index (CPI), and local research. (To learn more about the methodology, visit the Canadian Centre for Policy Alternatives – BC Office website here.)

According to the CMHC, housing is considered “affordable” when it costs no more than 30% of a household’s income. Based on that metric, we know that the living wage family is spending an unaffordable amount on housing in several BC communities.

As noted in the chart above, the living wage family spends more than 30% of their income on housing in Clayoquot Sound, Revelstoke, Kamloops, Greater Victoria, Metro Vancouver, and Greater Trail. While Greater Trail is just above the cusp at 31.1%, Clayoquot Sound rises to a shocking 37.3% of income spent on housing – leaving just over 62% available for all other family expenses, including child care, transportation, food, health care, and other basic necessities.

Taken together, these regions represent 58% of our province’s population. This means that, in regions representing over half of our population, housing is unaffordable for an average working family. And when we recall that the living wage calculation does not include any debt payments or savings for a down payment for a home, we can see that many families in our province will face an unending cycle of too-high living costs if the affordable housing crisis continues.

To combat this, we’ve called on the provincial government to protect existing affordable housing and create more affordable options for families. Tying rent increases to the unit, rather than to the tenant, would also help keep rental increases lower.

Housing isn’t the only hugely expensive item in the living wage family budget. Check back here tomorrow for another post exploring child care costs across our living wage calculation regions this year.