Living wages rise across BC

The living wage for communities across BC increased this year as the cost of living—particularly the cost of housing—continues to rise, the 2021 Living Wage Update, released today from Living Wage for Families BC and the Canadian Centre for Policy Alternatives shows.

Family expenses in Metro Vancouver and Victoria rose by seven and 6.8 per cent respectively which is more than the rate of general inflation that was 4.7 per cent over this period. 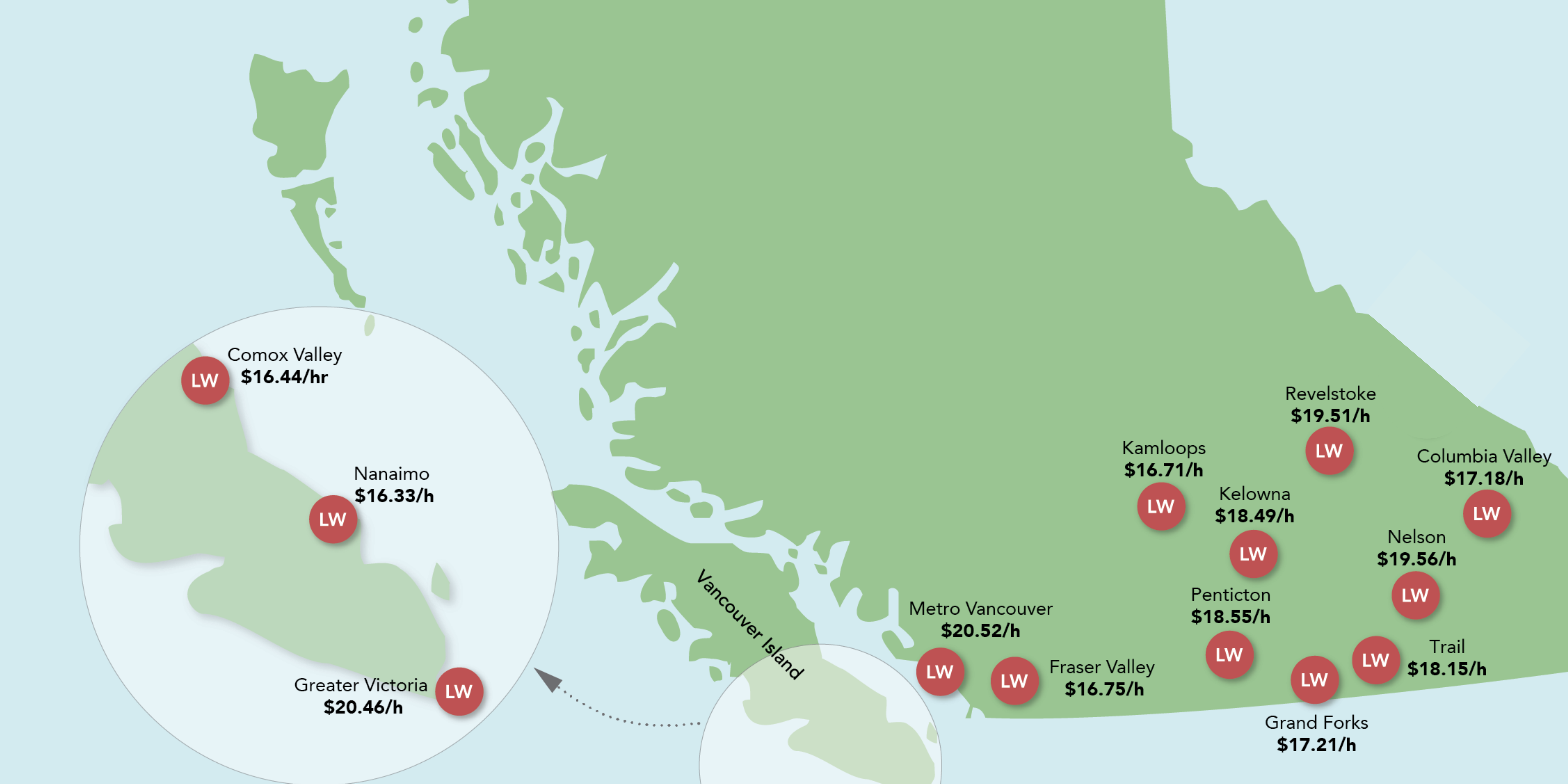 The 2021 living wage for Metro Vancouver is $20.52 per hour, a $1.02 per hour (or 5.2 per cent) increase over 2019, the report shows. At $20.52, Metro Vancouver’s living wage is much higher than BC’s $15.20 minimum wage. In fact, the living wage in all communities for which it is calculated is higher than BC’s minimum wage. No calculation was made in 2020 because of the unprecedented disruptions and temporary shifts in family expenses and employment patterns caused by the COVID-19 pandemic.

“The reality is that a number of families across BC earn less than a living wage and struggle to make ends meet with the rising cost of living, especially the cost of housing,” says Anastasia French, Living Wage for Families BC Organizer.

The living wage is calculated as the hourly amount that each of two working parents with two young children must earn to meet their basic expenses (including rent, child care, food and transportation) once government taxes, credits, deductions and subsidies are taken into account.

The highest monthly increases across the province were the cost of shelter and telecommunications. In Metro Vancouver the cost of housing rose 8.6 per cent and telecommunications six per cent. Housing remains the most expensive item in the Metro Vancouver family budget with the median monthly rent for a three-bedroom unit increasing by $147 in October 2020 to $1,850, an 8.6 per cent rise over two years, shows the Canada Mortgage and Housing Corporation (CMHC) rental market survey. The increase would have been larger without the pandemic-related rent freeze introduced by the BC government, disallowing rent increases between April 1, 2020 and January 1, 2022.

Recent government investments in child care and other policy measures to support families have helped to prevent a greater increase in the living wage.

“This year’s calculation shows the impact of public policy changes since 2018, notably significant child care investments, the new BC Child Opportunity Benefit and elimination of MSP premiums, as well as other small changes to government transfers and taxes. These changes have helped offset the increase in family expenses since 2018, improving affordability for modest- and middle-income families with young children, which demonstrates the power of good public policy to make life more affordable for families,” Anastasia French, Living Wage for Families BC

"Our business is nothing without our people, we want to make sure they are rewarded and being well taken care of. People give their lives to work for your company, it's imperative that they are rewarded for doing so and being paid well and well supported," says David Moerman of Surrey’s Revive Washing.

In 2021 Living Wage for Families BC certified over 100 new living wage employers—double the amount of any previous year—which shows that employers have found paying a living wage as a solution to some pandemic-related hiring challenges they have experienced.

“The pandemic has revealed how much of our economy depends on undervalued and underpaid workers in service and care industries. Public sector employers (such as municipalities, school boards, health authorities and universities) and private sector companies can support poverty reduction efforts and pandemic recovery across the province by increasing wages. This will also stimulate local economies because lower-income families tend to spend almost all of their income in their communities.” Anastasia French, Living Wage for Families BC

Over 300 organisations across BC—employing more than 30,000 workers and covering many thousands more contracted service workers—have been certified as Living Wage Employers over the past 11 years. These include the District of Central Saanich, SAP Vancouver, the John Howard Society of the Central and South Okanagan, Integris Credit Union, Modo and the City of Vancouver. Thirteen public bodies— including 10 municipalities, one school board and two First Nation Councils have passed living wage policies.

In addition to Metro Vancouver, living wages were released for 15 communities and regions across the province. The living wage cost is calculated annually in Working for a Living Wage: Making Paid Work Meet Basic Family Needs in Metro Vancouver, a report published by the Canadian Centre for Policy Alternatives’ BC office and Living Wage for Families BC.

Working poverty is a Canada-wide issue. Over 50 communities across the country, including the 18 in BC, have living wage campaigns and are advocating to improve quality of life for low-wage workers.