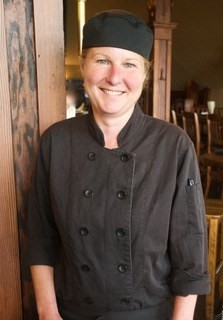 Ali Ryan is a Chef at Spinnakers BrewPub and Guesthouse.

She joined Spinnakers in 2004 as a line cook, prepping food and plating dishes. 16 years later she manages a team of 18 people in the kitchen.

The average tenure of a restaurant employee is 1 month 26 days. At Spinnakers, most of Ali’s team have been there at least 4 years.

“I have a great team who have worked together for a long time. Staff seem to like working for Spinnakers. I think it’s because of [owner] Paul Hadfield’s dedication to doing the right thing. He’s showed it so many times”

At Spinnakers, like many restaurants, there was a divide between how much staff who worked front of house (such as servers) and back of house (dishwashers and line cooks) were earning. There was also a hierarchy between some kitchen staff who were earning $15 an hour and others who were making $20 an hour.

“It’s easy to get pissed off if you’re working 8-10 hours for minimum wage and your colleagues are earning double. But it’s not an issue here”.

Last year as part of their COVID-19 reopening plans, Spinnakers took the decision to ensure that everyone earnt at least a Living Wage - $20 an hour, with tips pooled on top. 60% of staff received a raise to be brought up to the Living Wage.

“They talked to everyone – we want to change the game and system. Our biggest responsibility is to work collaboratively and safely. There was a lot of nervousness but people seem galvanised and excited”

Ali has seen the positive impacts that moving to a Living Wage has had on her staff.

“Everyone needs to be working at their best of their ability and not be distracted by money troubles.”

Prior to earning a Living Wage, one member of her team was living in an overcrowded and unsafe house in the middle of the pandemic.

“He was coming to work exhausted. But now he earns a Living Wage he can afford to move out. It’s given him real peace of mind”

For Ali, the biggest benefit has been in uniting her team.