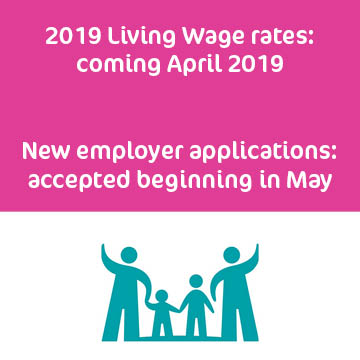 In preparation for calculating new 2019 living wage rates across the province, the Living Wage for Families Campaign will not review applications from employers until May.

Each year, the Living Wage for Families Campaign, in partnership with the Canadian Centre for Policy Alternatives - BC Office and community organizations across the province, calculates updated living wage rates. We refrain from reviewing new employer applications while we re-calculate.

In addition to updating our data for the living wage family's expenses - including housing, food, transportation, childcare, and so on - we also take into account any government programs, taxes, or transfers which would impact the living wage family. As such, we look to the provincial and federal government budgets, usually released in February and March respectively, for new programs or changes to existing programs.

Over the next few months, we will be analyzing the new data to prepare accurate, up-to-date living wage figures for regions across the province. Our 2019 living wage rates will be released at the end of April, and new employer applications will be accepted beginning in May.

Stay tuned for more information about the 2019 living wage rates and how you can apply to be a Living Wage Employer in the spring.

Want a living wage rate calculated for your region? Contact us!