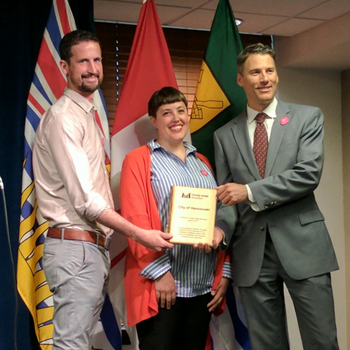 Through implementing a living wage the City of Vancouver has demonstrated that there is a role for employers in ending poverty.

The living wage is the amount that two parents working full-time, full-year need to earn in order to meet their costs in a community. The living wage in Metro Vancouver is $20.62/hr.

The journey to the City of Vancouver certifying as a living wage employer has been a multi-year collaborative effort on the part of the mayor and council, who, in 2015, voted unanimously in favour of this policy, and staff who have been working hard to see this plan through. City staff have shown a deep commitment to the living wage and the transformative role it can have for families.

Community organizations unions and activists have cheered on the City of Vancouver and the Vancouver Police Department. Thank you to the Metro Vancouver Alliance, First Call: BC Child and Youth Advocacy Coalition, BC Poverty Reduction Coalition, the Vancouver and District Labour Council and the individuals activists who came out to events and contacted your city councillor.

The City of Vancouver joins the Yuułuʔiłʔatḥ Government - Ucluelet First Nation, Huu-ay-aht First Nations, New Westminster, Quesnel and Port Coquitlam as local governments in BC who have successfully implemented living wage policies. Pitt Meadows and Parksville have passed polices and are working towards implementation.

Approximately, 34% of couple families in Vancouver are not earning a living wage. This is an issue that needs all levels government at the table; and not just government, low wage workers and people living in poverty have solutions. We need to be ready to hear their voices and take action towards a poverty free BC.

Today the City of Vancouver becomes largest Living Wage Employer in Canada. This is a remarkable show of leadership on the issue of low wage work. I am very excited to be here today with the City of Vancouver and the Vancouver Police Department in order to congratulate them on their leadership and their investment in the economic health of their community. After all, work should lift you out of poverty, not keep you there.